Pumpkin season can happen anytime with the invention of canned pumpkin. I especially start cranking out the pumpkin recipes for fall season and enjoy the warm spices then so much more!

I have created a sugar free, gluten free, keto, low carb pumpkin muffin that you will be so enthralled with! It is moist with a crunchy topping that REALLY sets it apart from other muffins you may have had!

They are NOT dry or crumbly at all and you will be sharing the recipe with all of your friends because it is THAT GOOD!!

Don’t forget to get some of these tulip cupcake liners as it allows for your muffin to rise up and get that bakery style feel!

If not, then I recommend you go with filling the muffin cups half full to allow room for the topping and rise. 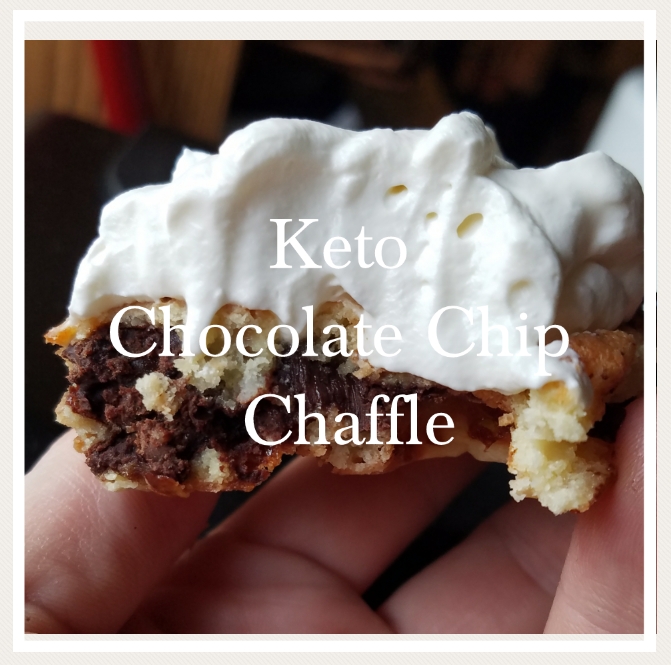 Now I am totally a wafflehead so when I heard of chaffles it was an easy sell!

So far I have only done savory ones, but this one is so good it had to have a post dedicated to it!! Even the kids loved it and I am planning on making more and making ice cream sandwiches😍

Warm up waffleiron to medium heat.

Whisk egg. Add everything to the bowl EXCEPT coconut flour & chocolate chips.

Makes 3 waffles
.
.
Swerve brown sugar OR Sukrin Gold can stand in for monkfruit and maple extract. Its cheaper to get the extract and granulated sweetener though!

The one in the main picture has fresh whipped cream sweetened with stevia. Then I froze it for 15 minutes!! So wonderful this way! Or cut into strips and dunk in some unsweetened almond milk!! 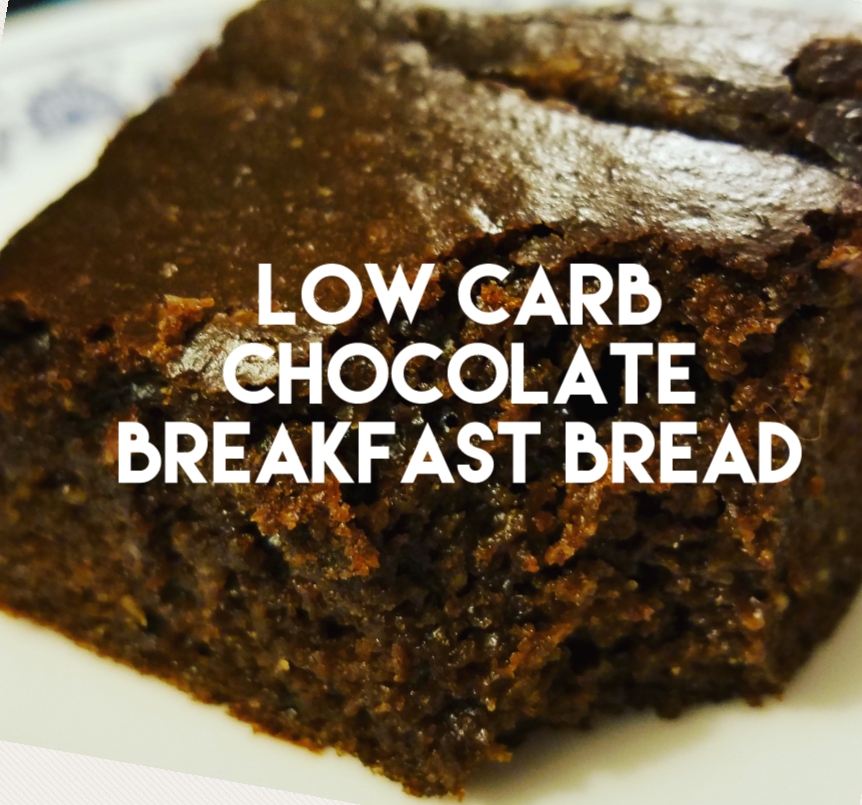 This is a great replacement to curb your cravings for chocolate, cake, donuts and sweets you may want for breakfast…..or even a snack!!

Loaded with healthy fat, super moist and minimal crumbles, this breakfast bread can be jazzed up with chocolate chips if you want❤

Melt oil & almond butter in saucepan with a whisk. Add the rest of the ingredients EXCEPT egg.

Bake 20 min until toothpick inserted in middle comes out clean. 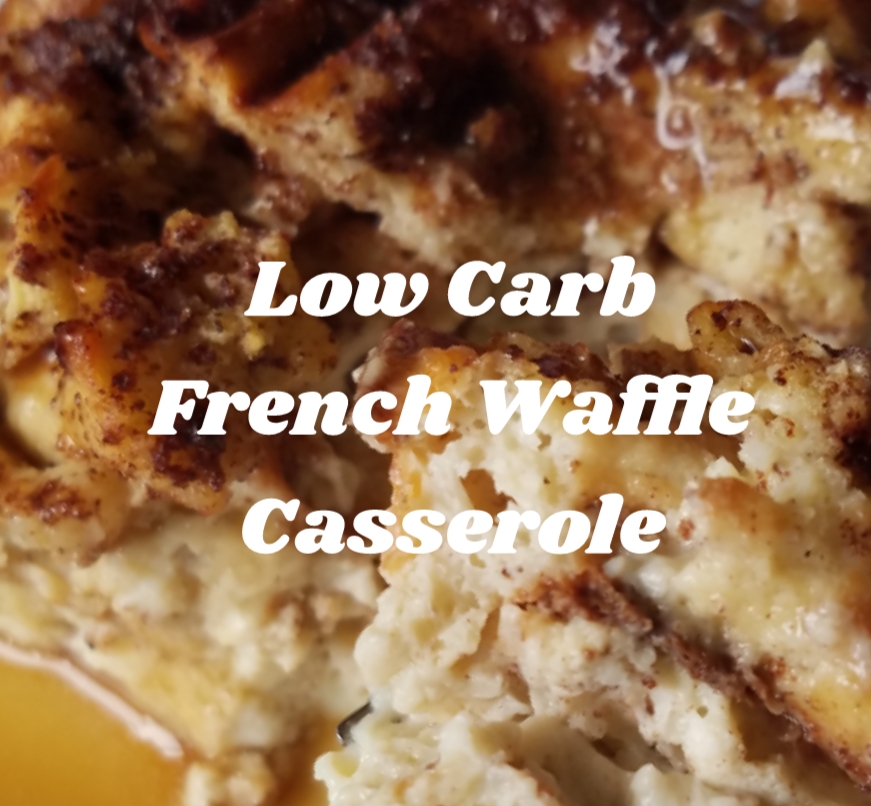 Have you made low carb waffles before?

You will need to make some for this low carb spin on an old classic breakfast casserole!!

Visit my two previous posts where I give you great, quick and easy recipes for low carb waffles!

Ok, now you have your waffles which is the base of this casserole!

If you are feeling adventurous, go make some of my KETO MOCK MAPLE SYRUP to top your serving of this casserole with!

Cut waffles into small squares and distribute evenly in a greased 8×8 pan.

Press down with a spoon to soak up mixture better.

Dot the top with cold butter cut into pea-sized amounts.

Mix monkfruit, maple extract and cinnamon in a small bowl with a fork until blended.

Sprinkle on top of casserole.

Bake for 45-50 min at 350F until top is crispy and it no longer wiggles when gently shook.

The custard inside should not be wet. Put back in oven 5 min at a time until it is not wet. This all depends on what waffles you use and how well they soak up the liquid.

You can let this sit for overnight covered in the fridge if desired.

Store in fridge up to 5 days.

Carb count depends on your waffle you choose. 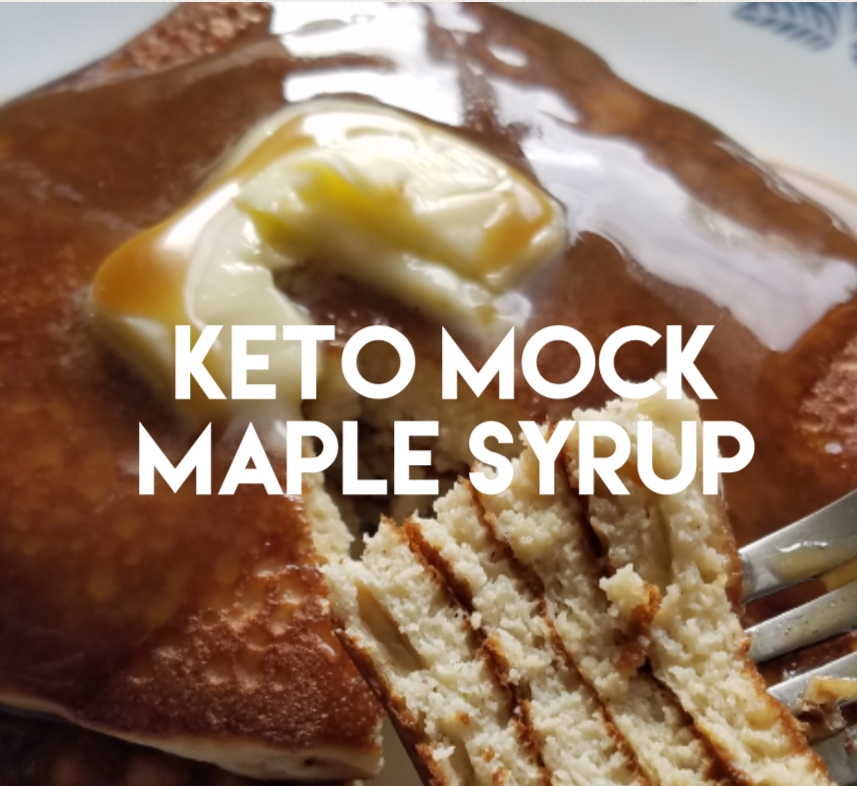 Since starting keto I have found that there are many different companies catching on and making sugar free versions of the most beloved condiments. Ketchup, dressings and maple syrup.

I have and still do enjoy pancakes and waffles😋 They are the ultimate breakfast, especially when they are keto!

I have tried monkfruit maple syrup topping and walden’s calorie free maple syrup. They are ok. They work for what they are but I think they are too thin.

I figured I could get the ratios right if I tried and I DID!!

There are two odd ingredients in this recipe, one is glucomannon. I have brought it up before and you can get it online. I recommend the NOW brand one. Its a small investment that lasts as you only use a tiny 1/4 to 1/2 tsp per recipe. It is used in my baking mix as well. Its worth it, get some!

The 2nd is Organic Maple Extract. I get both of these online. The extract is not only good for this maple syrup recipe but also for my Keto Breakfast Sandwich recipe and make your own Keto Brown Sugar! I love adding a little to my Keto Pancakes too!

Put all in a medium saucepan EXCEPT for glucomannon. Bring to boil then sprinkle glucomannon in while whisking briskly.

Turn down to simmer while still whisking. Whisk 1 to 2 minutes until thickened.

Remove from heat and let it cool a little before putting in a jar, or recycled syrup bottle! 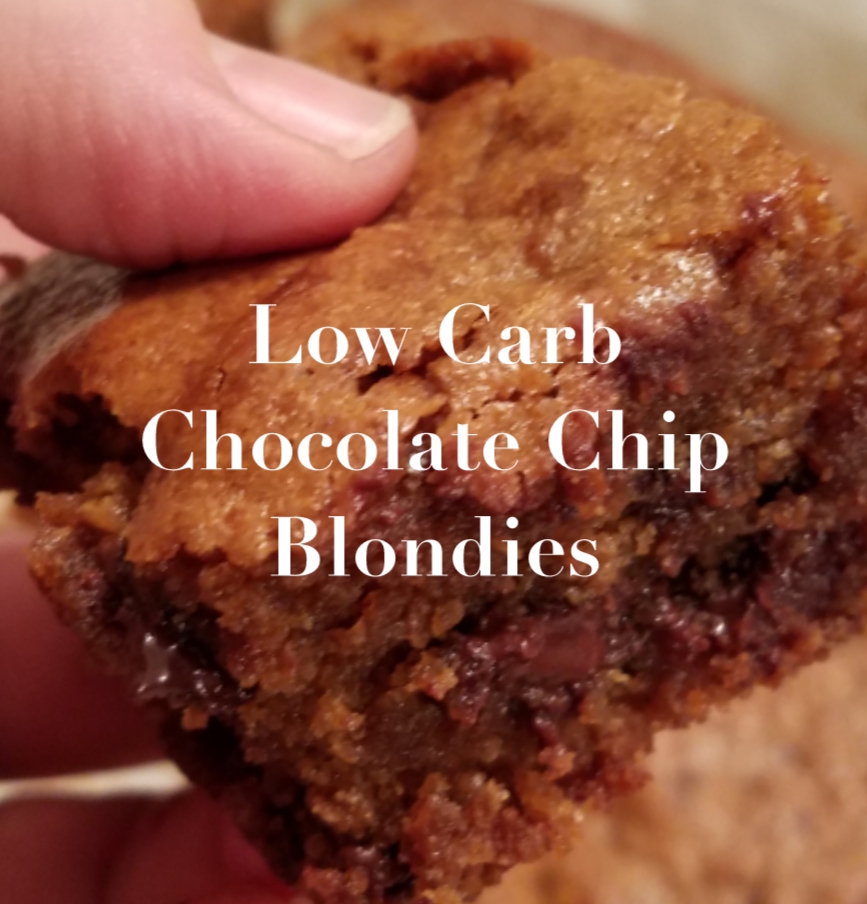 I originally made these keto in this recipe here at 4g net carbs per 1/16th.

Now I have tried this recipe with Nutiva’s Organic Coconut Sugar and they turned out AMAZZZZIIINNNGG!

I saved up my carbs for this treat this evening! It was soooo worth it!

Preheat oven to 350°F. Line an 8×8 pan with parchment paper. Melt butter and almond butter in medium saucepan. Mix sweeteners and extracts in a small bowl. Mix into saucepan. Beat in eggs one at a time. Whisk well. Now add flour, salt and baking powder. Stir in chocolate chips. Bake for 30 to 35 minutes until toothpick tested mostly clean with a few crumbs. Cool before lifting out of pan and cutting into 16 squares. 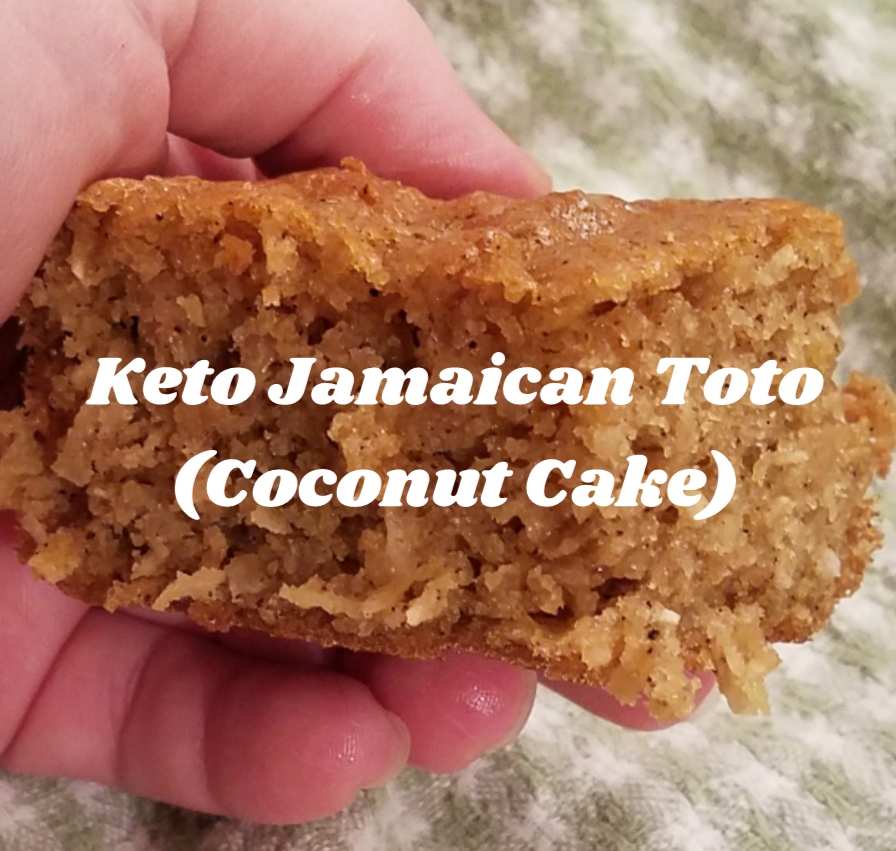 Toto is a coconut spice cake that is popular throughout the Caribbean. On some islands it is simply called Coconut Cake. Toto is a dense cake that is rather plain and not much to look at but the combination of coconut and spices makes for a delicious confection that is sure to delight any coconut lover.

It is usually made with wheat flour and white sugar, but I have #ketofied this recipe so I use #almondflour and #goldenmonkfruit . If you follow the instructions exactly and fold in the whipped egg whites, you will get a fluffy, moist cake that melts in your mouth!

Here are some pictures to guide you in making this awesome cake!

The batter you mix before folding in the whites.

Getting started. I used 1/3 of the whites at a time.

Final third. The end should resemble this.

Spread into parchment lined pan and cook till toothpick tested clean and golden like this.

Preheat the oven at 350F degrees

Line an 8×8″ square baking tray with parchment paper and set aside.

In a large bowl, add all of the dry ingredients and combine.

Stir in the melted butter and the egg yolks with the almond milk until everything is mixed together evenly then set aside.

Carefully fold the egg whites into the batter, rotating the bowl with each fold.

Bake the cake in the oven for 40-50 minutes, it should be golden brown and firm to the touch or toothpick tested clean.

Remove the cake from the oven.

Lift it gently out of the pan by two sides and place on a cooling rack.

Store in an air tight container and eat within a few days or freeze. 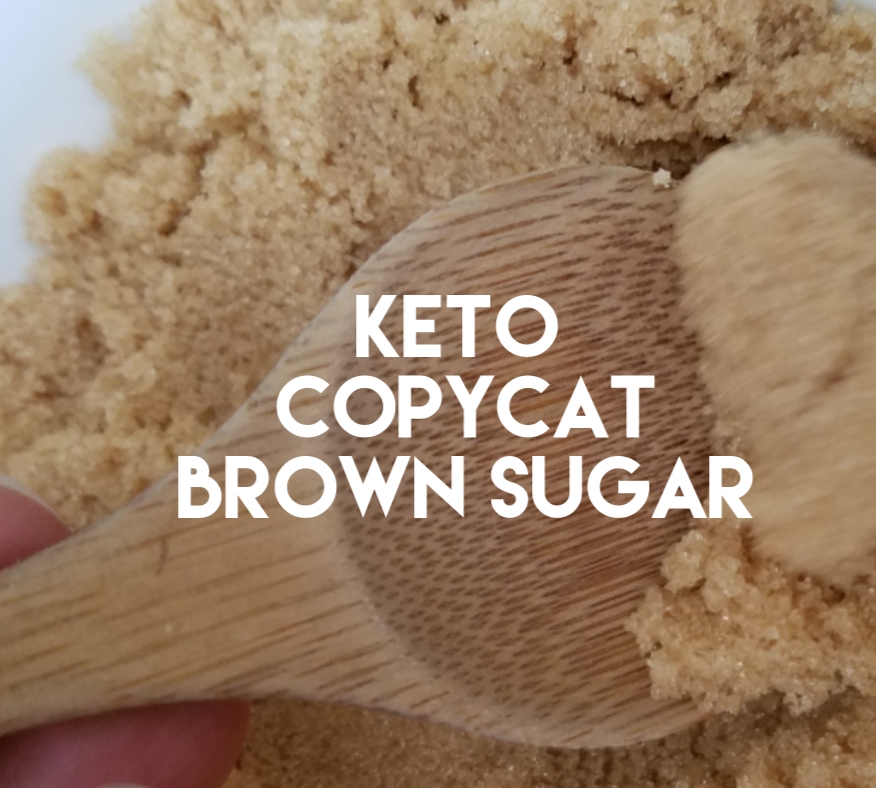 You may have heard of Sukrin gold sugar. It is a sugar free brown sugar replacement. After looking at its ingredients I see that malt flavoring is used. This is something I avoid as I steer clear of gluten since I have an intolerance. My sinuses swell and I break out in eczema😣

Malt is usually made from barley and is not gluten free. It can be made from corn, but that is rare. Most malt comes from barley grain that has been soaked, germinated and dried. Ingredients made from maltinclude malt flavoring,

malt syrup and malt extract, none of which are currently considered gluten free.

So imagine how excited I was to put together some commonly found ingredients to make a very tasty copycat substitute of this baking gem!

I have found my ingredients online at thrivemarket.com or luckyvitamin.com for sales. Amazon pretty much has them all too!

Put all ingredients in a small bowl and mix with a fork cutting the extract and stevia drops into it until it is uniform in color.

Use like brown sugar in recipes. This works great in baked goods especially!!

What would you use it in?